Oxford University publishers have apologized and pulled a children’s book from shelves amid allegations that the story and its illustrations are racist and Islamophobic.

The story of Biff, Chip and Kipper – used in classrooms across the UK to help teach children to read – sees the protagonists magically transported to a generic Middle Eastern-like country.

The book Oxford Reading Tree, titled The Blue Eye, by Roderick Hunt, was deemed offensive after the villains of the children’s book – perceived to be Muslims – were described as ‘unfriendly’ and ‘scary’.

Social media commentators have suggested it teaches children to be racist and Islamophobic.

The publishers – Oxford University Press – have since withdrawn the book from publication and apologize for any offense caused.

The adventure features a princess named Aisha, who is pursued by a horde of angry men determined to steal a magic stone called The Blue Eye from her.

She tells the child protagonists, Wilf and Biff, that she cannot become queen in her homeland without the blue crystal.

A book called The Blue Eye has been pulled by publishers after social media users called out its depiction of seemingly Muslim characters, saying it encouraged Islamophobia and racism.

The stars of the Oxford Reading Tree series – now a Cbeebies TV show – find themselves embroiled in adventure after being magically transported to the land with no name.

Readers took issue with the setting described as “creepy” and the group of antagonists “unfriendly” and “dangerous”, sharing photos of the offending pages on Facebook and Twitter.

The book – published in 2001 – was withdrawn last month by publishers Oxford University Press (OUP), with the company saying their few remaining copies had been destroyed.

In a market scene, men wear flowing white robes and white turbans with dark glasses and facial hair, while a woman can be seen walking through the stalls wearing what appears to be a niqab – a veil covering the face under the eyes – and a scarf.

The child characters suggest that some buyers seem “unfriendly”.

In another scene, the protagonists find themselves in a narrow alley after being dragged through a magic portal, before a man in a turban and combat pants is shown opening a wooden door – which Wilf said “scary”. 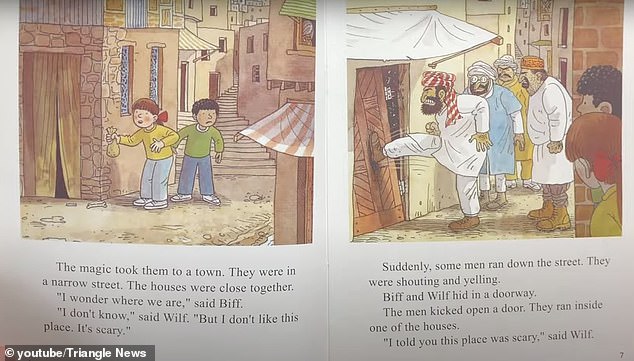 Pictured: In a scene from the book, a man wearing a turban and combat pants is shown opening a wooden door – which Wilf says is ‘scary’ after being chased down an alley

And when Wilf, Biff and Princess Aisha are chased by a gang of men trying to steal a magic stone from them, the royal describes the group’s attackers as “dangerous”.

Canadian think tank Anti Bias Curriculum Project said it was “disgusting” that the book had been printed.

In a tweet, a spokesperson said: ‘Racism is being taught and this is a clear example of how not only parents have a responsibility to prevent their children from being racist, but also educators.’

“Disgusting to see that this has even been allowed to be published or even put on the shelves of children’s books.”

“What makes me uncomfortable are the teachers who pretend to see nothing wrong with this and continue to expose our children to it, not realizing the damage they are causing.” 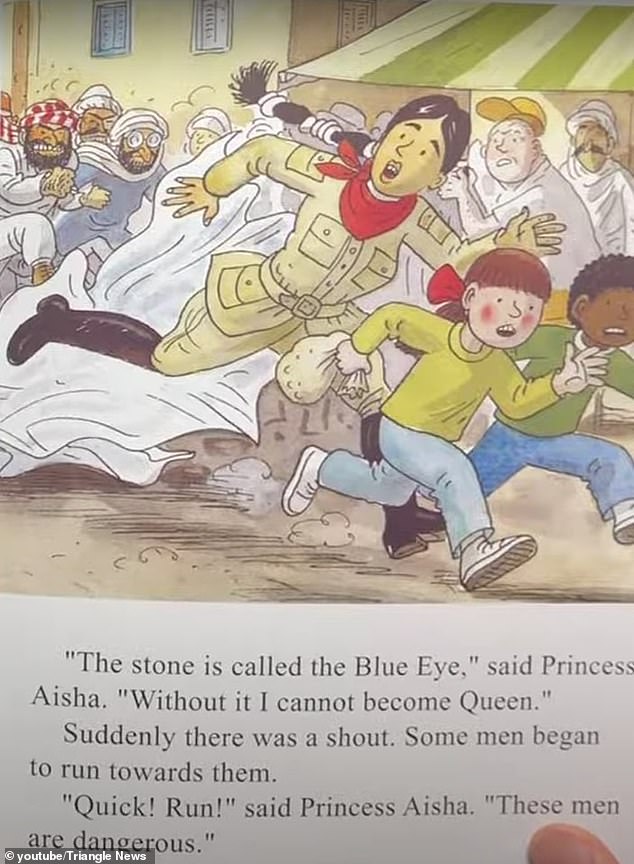 A spokesperson for Oxford University Press confirmed that the story was no longer in print.

They said in a statement: “The title in question – The Blue Eye – was originally released in 2001 and amended in 2012; the last sentence of the text on the page in question has been changed to read: “It would be easy to get lost in such a crowded place”.

“The book was then completely out of print in March this year, following an independent review, and is no longer available for purchase.

‘OUP has destroyed its own remaining stock of the book, although a small number of copies may still remain in the supply chain; some older titles may still be available in libraries or as second-hand copies.

‘At OUP, we regularly review and make changes to our list of titles to ensure they are current, diverse, inclusive and reflective of the world we live in, and we take steps to remove any products that do not are most suitable from our collection.

“We also constantly listen to feedback from our customers and take our responsibility to learn and improve very seriously.”

Mixed reaction: Reviewers denounced the depiction of Muslim characters in the online book while others said the context of the story was important and said the kids were just “being careful”

They said the language was used towards the villains of the story and did not reflect the attitude of the fictional children towards anyone in the country.

Leonardo de Waal said: “What is perhaps inappropriate is that we jump to conclusions before setting the context.

“This is precisely what we should avoid.

“It’s a story where these kids have to hide something valuable and become paranoid in the process.”

Asma Jaleel said, “These two characters are used in literacy books and go to different places to teach children.”

“As it is Ramadan, it makes sense that they are attending a market in an Eastern country!”

In a follow-up tweet, she added: “Unfriendly yes… on trial!” But that’s how you break down biased opinions by having a debate.

“We don’t judge on appearance! Why are they dressed differently, culture/faith? »

Tess said: “You’re ‘reading’ something that you don’t like.