On January 10, Nancy Meyer made journalism history by becoming the Houston Chronicleis the first female editor and the first lesbian. His new job is a perfect fit for someone whose family has always loved newspapers.

“My father was a voracious newspaper reader, with four newspapers coming to our house – the New York Times, Newark Star Registry, New Brunswick Home Newsand the Hillsborough Lighthouse“, recalls the 58-year-old woman of her childhood in New Jersey. “I majored in communication and wrote a few articles for my college newspaper. But writing under a deadline took away the fun of writing, so I switched to the business side. As I regularly tell our staff, no matter your role or position, you help support the role that strong journalism plays in our community. This remains our main mission.

Meyer brings three decades of press experience to the the Chronicleincluding her years as editor of the Miami Heraldthe Orlando Sentineland the Hartford Current. Between 2016 and 2018, she served as President of the New Jersey’s Bergen Recordpart of Gannett USA today network. She was president of the Miami Herald for less than a year when she was recruited by Hearst to the Chronicle work. Her hiring is something of a homecoming for Meyer, as she served as advertising director for two Hearst newspapers between 1997 and 2006: the Times Union of Albanyand the San Francisco Chronicle.

Being a lesbian journalist hasn’t really been a problem in today’s press world.

“I don’t remember a specific obstacle, but I think sometimes those challenges can be nuanced,” she says. “For example, I learned to play golf because it was easy to see relationships and business [deals are made] on the golf course, and it was mainly my male colleagues who were playing. But I also organized spa days for our clients. I think of the lyrics of the play hamilton: ‘I want to be in the room where it’s happening.’ Leaders need to pay attention to these nuances and make sure they highlight unique voices. Invite them into the room.

“It was also a good reason for my return to Hearst. When I first joined Hearst in my early thirties, my editor at the time took me to lunch and asked me directly if I had a partner. The newspaper publishing world is a small place, and I said yes. He said, ‘I hope she knows she’s now part of the Union Times/Hearst family, and [I also hope] you both feel welcome. From that point on, bringing my unique leadership perspective as a woman in the LGBTQ+ community was a big differentiator. He welcomed me professionally, he also reached out and welcomed me personally.

“I see it as a both/and, not an or/or,” says Meyer. “More than half of Houston households receive a Houston Chronicle product delivered to their home every week. The Houston Chronicle, the Conroe Courier, The Voz, and twelve unique weekly titles are hand-delivered to more than one million homes. Print remains a vitally important product for our audience. And we are aggressively investing in our digital future, houstonchronicle.com,
chron.com, HC app, the E-Newspaper (an electronic replica of the newspaper) as well as social networks. We will be where our audience prefers to read us. It’s not the platform, but the journalism that should count. 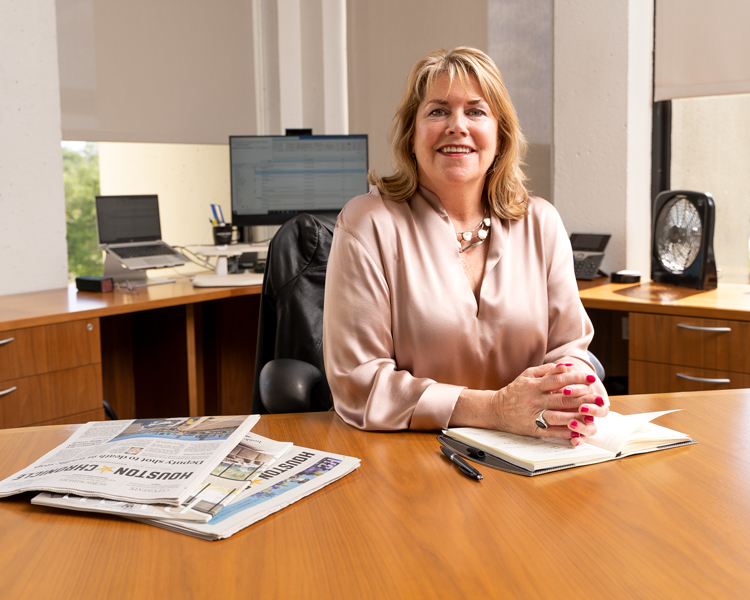 More importantly, she believes that the the ChronicleThe journalism brand is on point. “I look like a sales person,” she admits, “but the Houston Chronicle is woven into the fabric of our Houston community. We have been the storytellers of this great community for over 121 years – a trusted, respected, debated voice, a civic conversation starter. We are a watchdog, holding those in positions of power accountable. I want to maintain strong journalism that our community can rely on. Audiences today expect more, more digital news, more breaking news and more local news. I expect you will see expansion around these key areas. In addition, it is extremely important to ensure that our diverse communities see each other in the Houston Chronicle, www.houstonchronicle.com and chron.com. Rebuilding and strengthening our community ties is a priority. And just as important, ensuring that we have great talent and that the culture within our organization is supportive, a culture where our people can grow professionally and personally.

Meyer and his wife, Melissa Macri, have settled into life in Houston very well, although they are still house hunting.

“We spent a lot of time doing open houses on the weekends,” Meyer says. “We love exploring all of Houston’s unique neighborhoods. We spent a day in Galveston, attended my first women’s MLS Dash game and got to see a production at
The Alley. The adventure of a new city is invigorating. The restaurant scene here has so many choices. Although I tried some good food, I really enjoyed it
The Table of Ouisie. Since I’m not from the South, enjoying southern comfort food was great. I also just tried Kiran’s wonderful Indian flavors. I check things the Chronicleis famous Alison Cook’s Top 100.”

The couple also enjoyed long walks in Tanglewood and Memorial Park with their adorable Cocker Spaniel, Daisy. She’s found Houston to be very dog-friendly, though she’s still on the hunt for the perfect groomer. They also enjoy reading, golfing, cooking and entertaining. And she plans to get involved in the community here.

“I usually give it six months to settle into my role, and then I start getting involved in community and business organizations,” Meyer says. “Being part of the LGBTQ+ community will be a priority.”

This article appears in the June 2022 issue of OutSmart magazine.